Sophie is an eleven year old girl who’s on a mission – to find No-Thing at No-Where. Yet to reach it she must enter the Imaginal World; the world of our dreams where she must first learn the power to dream harder, dream faster. Our world – the Regular World – is in need of help.

Once inside, Sophie embarks upon a fantastical journey where she encounters such characters as the energetic Eddie the Gangly, the slobbering Borik the Harkone, the one-eyed Huffalots, Jimbob the Oldest Sproggit, the enigmatic Snifflegruffs, the elegant Lady Drakona, the cruel Blackheart Jake, the odd pair Sergeant Spittlespat and PC Wobblekirk, grumpy Gabby, jolly Ralph – and Ruu Eddin, the mysterious multi-colored mystic trickster.

Sophie’s Search for No-Where shows us that the Imaginal World can be both a curious and an unsettling place – it is not for everyone. Yet for those who dare to step inside they will find the fantastical, the magical…where everything is exactly not what it seems.

Read a short excerpt from the first chapter

There are dreams, and then there are dreams. And if you are one of the very few then maybe you have experienced those dreams that lay within dreams. This is a realm that is often more real than the one you experience upon waking up. And that was Sophie’s dilemma – her dreams seemed more real than the everyday world. And that was why she began to suspect that the everyday world may not be the real thing, after all. And then it happened again…

…Sophie wandered another time down the corridors and halls of what was the most astonishing house. It was more like a palace than a house, so spectacular was its appearance. Each room Sophie looked into was decorated with the most extravagant furniture she had ever seen. Huge chairs with velvet upholstery and six legs looked as if they were waiting for giants to occupy them. The great house was ornate and extravagant, with golden curtains and hanging chandeliers that sparkled with rainbow reflections. Long corridors stretched away in many directions, seemingly without end. This was not the first time Sophie had been here. She had walked the halls and corridors of the same house over and over again for what must have been weeks now. Then again, time in such places never seems to go in straight lines. The idea of weeks was a reflection back to Sophie’s time in her normal life. But here, in this house, things and time, and timely things, were just altogether different – somewhat like ice cream and mud cake.

Things were upside down too. Along the walls of some of the corridors were pictures and paintings hanging upside down. Landscapes and portraits showed inverted worlds and faces. Suns and stars appeared as if rising from below, whilst the earth above covered the cosmos like a terrestrial sky. So many times Sophie had wandered the corridors of this house; and each time exploring a little more… and each time not getting far enough. You see, there’s that problem with time again!

As she walked she felt the carpets soft beneath her feet, and she only realized when she looked down that she was barefoot. Where were her normal shoes? It all seemed so unreal at the same time that it felt some kind of normal. Was that what it felt like to have stepped into another world? Sophie stopped to listen to the silence. Not even the sound of a breeze or Nature’s offerings could be heard through the magnificent open windows. Often the glare of the sun streaming in made it difficult for Sophie to see everything clearly. This place, she thought to herself, is not a part of my world.

Treading softly, Sophie followed some steps that went down at the end of one of the corridors. She found herself once again in a place she remembered - a spectacular garden of the brightest colors. She could see small bird-like creatures of four wings that chirped in sweet squawks darting through the branches of trees. This was the only sound to be heard, the bird-song of the strange flying feathered creatures. Sophie felt that they were singing especially to mark her arrival. And there, not far away through the trees, stood the apparition of the tall shimmering lady. Sophie had seen this lady several times yet had never managed to reach her or speak with her. She slowly stepped towards the shining lady who stood elegantly dressed in flowing white robes. As she approached, Sophie noticed that the lady had the most penetrating gaze, firm yet soothing, and almost golden hair.

Then the same thought occurred to Sophie, as it always did before. ‘I know I am in my dream again…I must not wake up… I must hold on.’ But you know how it is. Once such a thought enters into your mind, it plants the seed of opposites. It’s like someone telling you not to do something, so of course you go and do it anyway. If there was a law for this it would probably be called the law of contrary action. So, as soon as this thought occurred to her, Sophie knew she would lose her grip - as it always happened. Just a little longer! She pleaded…but already the world-more-real-than-the-real-world was slowly beginning to slip away from her. Each time Sophie had the realization that she was inside one of her own dreams then she would lose her dreaming concentration and the inevitable would happen - she would wake up. Yet she also noticed something else. At each attempt she would gain a little more time before her dream would dissolve around her. In these extra moments of lucid time Sophie would try to get closer to the shimmering lady. On this last occasion she stepped toward the apparition, reaching out to her, only to see her endearing smile change into a frown of disappointment. The house began to disappear into thousands of tiny filaments like falling snow until nothing was left. Sophie stood alone in the middle of complete whiteness as if suddenly engulfed by a blanketing fog.
‘Damn it, not again!’ said Sophie under her breath as she sat up in bed. The signs of early dawn had already crept under her curtains. As any good dreamer knows, these flickers of daylight always come to kick you out of bed. They are like tongues that lick you back into everyday reality. For Sophie, who had been dreaming of the house for so many weeks, she felt frustrated that she had still not managed to reach the shimmering lady – whoever she was! And yet Sophie also had a niggling feeling inside that the strange apparition was waiting for her. Sophie was a little angry with herself. She knew she had to make more effort – to dream harder. Yet Sophie was already a dreamer - too much of a dreamer according to her family and friends. She was often accused and teased for always being ‘in another world,’ or something to that effect. Sophie’s mind often drifted into wild imaginings when she was in class, at home, or even when hanging out with her friends. It was as if, for Sophie, this world that everyone lived within could not hold her attention long enough. It wasn’t that she was bored. She just felt that there were other worlds to be a part of too. And that was normal for Sophie. What was not normal was that other people around her didn’t seem to question the world they walked around in. So, you can guess that Sophie was somewhat between…well, between two worlds – which you might think is not a bad thing. There are worse things to be between, such as between two hungry sharks, or between two bread buns in a giant hamburger factory. But that’s another matter…

The house where Sophie lived in her regular world was much smaller than the mansion in her dreams. And the pictures and decorations on the walls were the right way up too. Well, the right way up for this world at least, thought Sophie. Then again, does it really matter if the pictures consist of a horse pulling a canal boat or three flying ducks? Really, what was the point!

As Sophie sat down for breakfast she noticed, as she always did, how everything was a routine. Her family – the Saunders family – were nothing if not regular in their ways. In fact, the Saunders were far too regular for Sophie’s liking. Her younger brother, James, would eat his cereals with orange juice, and make faces at her. Her father, Richard, would eat his toast with a mug of tea whilst flicking through the morning news on his tablet. And her mother, Alice, would be fretting around the kitchen as if she was holding the world on her shoulders like Atlas. It would be the same almost every morning. 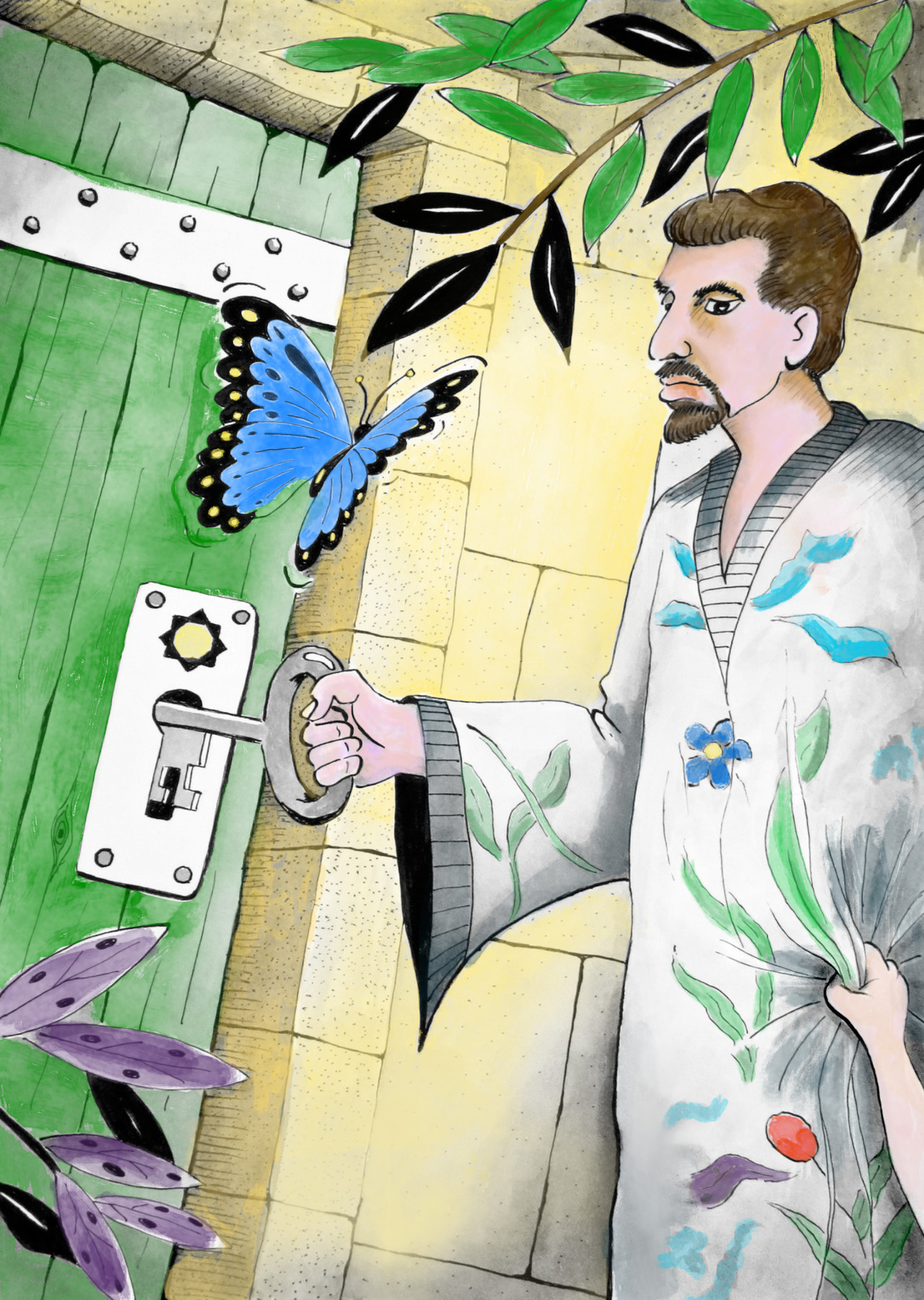